As we deal with the second act of Covid-19 (aka the Delta variant), discussing our local office and industrial market may be useful.

Starting with a look back, remember the futurist or self-proclaimed experts who said that working in a traditional office was over and gone? Nobody would work in an office because it’s a germ-breeding, super-spreading environment. We didn’t need face-to-face interactions. ZOOM could keep us all connected. And then we heard that remote office worker productivity was spiking.

Now, we have some observations. 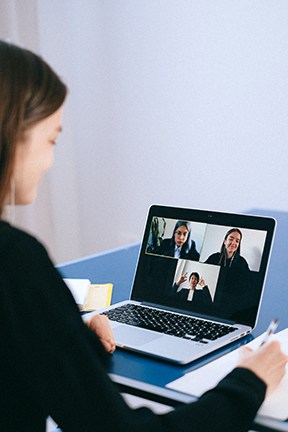 Office productivity did spike for a relatively short time. Turns out people were frightened to lose their jobs, so they put out more work. ZOOM meetings were going to replace face-to-face meetings. But ZOOM meetings lead to ZOOM fatigue. The “magical connection” was not fun. People were burning out. New hires in this environment were really challenged to learn and fit into the corporate culture. It wasn’t as easy as thought.

Downtown restaurants, hotels and retailers were hammered. In some urban areas restaurants that had been in business for decades and local icons closed forever. Hotels in cities that attracted tourists and conventions were devastated.

Human behavior is both complicated and not predictable. The so-called experts overlooked the basic fact that humans are herd animals that want other humans close by. Working in an office or industrial building fulfills that important social need. In the end we will probably end up with a hybrid use of office space for the near term. I personally predict we will get back to pre-pandemic levels of office space occupancy.

Early in the pandemic, some large office tenants rushed to downsize by putting space for sublease. Investors shunned office buildings like they had the plague. Now as we end Act 1 of Covid, many such tenants have taken space off the sublease market with plans to reoccupy. Here in Boise, we are seeing office and industrial tenant occupiers actually expand their space. In the newly completed 191,000 SF 11TH and Idaho office building, the developer said that a significant portion of new tenants had had smaller footprints but were leasing more space with the goal to hire or grow their staff.

At TRA we are seeing indications that options for our office tenant/occupiers to consider could run short. Certain submarkets are particularly tight. We have completed office space surveys for clients recently and were surprised how few options there were and that some were leased before we could tour them. We previously mentioned that new Class A office building at 11TH and Idaho. Leasing activity for the 191,000 SF was languishing for several months. Then tenants stepped up and in 45-60 days all except 10,000 SF was spoken for. Tenants were hustling to secure space. The supply of Class A office space is at an all-time low in downtown Boise, and we are not sure when that will change.

Overall, we expect Boise to continue its growth albeit at a slower pace. So, we are counseling our tenant/occupier clients to be prudent and deliberate when considering and securing new space or buildings, and to be aware of the surging market conditions – and act accordingly.