According to Wikipedia and CNN Business and other sources, the Great Recession was officially between 2007 and 2009. But as most remember it took a long time or seemed like too long a time to recover to pre-recession levels of business activity. Now the recovery is at 106 months plus which is close to putting it as the longest recovery since the 1991-2001 economy which set the record for the longest recovery.

As a sidebar, I wonder how much longer that “recovery” would have continued if the attack on the World Trade Center and the Pentagon hadn’t derailed us emotionally?

According to some economists and their theories, the recent recovery was unusually slow and business didn’t “roar back” as is more common. And that may have in fact be a contributing factor to the longevity of our current recovery. So it was a slower recovery but it has lasted a long time.

Again from the economists (whoever they are), there is nothing on the horizon to say that the recovery won’t last until July 2019. Hopefully, we will keep going after that date. So with that as background where is Boise on the Commercial Real Estate Cycle Economic Clock? 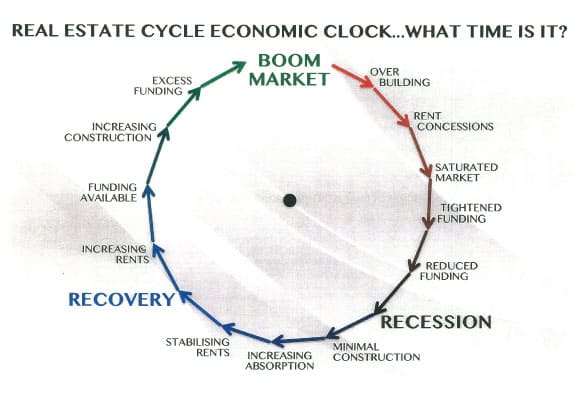