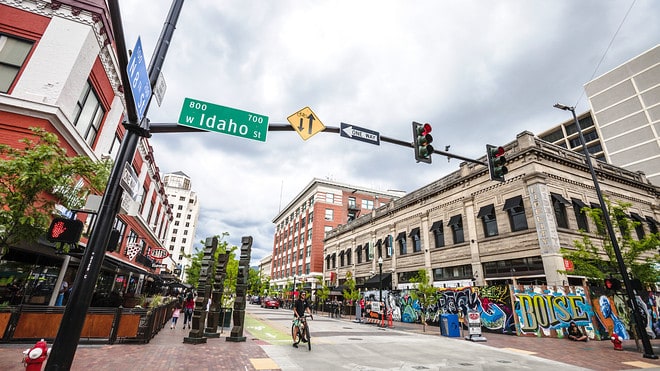 Boise is on all sorts of lists for Best Place to Live, to retire, for millennials, etc. Forbes recently said that Boise is the fastest growing city in the US. Trip Advisor named 8th Street/ Downtown Boise one of the coolest, hippest neighborhoods. Boise and Nampa were named the #2 and #3 Best Run Cities in the US IN 2019. The accolades just keep piling up.

Boise has gotten tons and tons of national recognition, but is that enough to cause the seeming flood of people moving here eager to get the old state automobile plates off and the IDAHO plates on? Personally, I doubt it. People as a rule don’t make life changing decisions like moving away from familiar places, family members and good friends because a place was listed as a “cool place” to live. Both people and companies make such a move for a variety of reasons and sometimes it is to get away from a situation that they feel is undesirable.

Maybe a better way to look at Idaho and Boise’s growth is to look at what is going on in nearby areas. What factors and forces are coming to bear? The pandemic has caused people to flee the congested big cities where social distancing is nearly impossible and where the previously active dining and entertainment scene is no longer available.

The pandemic has been a perfect storm for some cities and states. Covid-19 has given people the option of working remotely (code word for working at your dining room table at home). Companies saw an opportunity to reduce their office obligations. And some employees no longer have a 1-2 hour commute each way to fight to get to the office. In the early days of the lock down many employers reported a spike in staff productivity. Now some think the spike could have been caused by the fear that they might be furloughed or laid off. Productivity has dropped off to previous levels or in some cases gone below as we realize we are herd animals and do better with other humans around us.

So what may be largely driving our growth? Three words: “The Golden State.”

California is a $3 trillion economy and as of 2018 was the world’s fifth largest economy. The state is blessed with to-die-for weather, it has spectacular scenery and outdoor opportunities, and it is home to our country’s tech and entertainment industry. It’s an understatement to say it has a lot going for it.

But there is trouble brewing. California is facing a $45 billion budget deficit caused by the pandemic. San Francisco, which is heavily dependent on tourism and convention business to fill city coffers is facing a $2 billion short fall. The San Francisco Business Times has run several articles on the fiscal challenges in this state. According to my [very scientific] googling, in California the top one percent of income earners pay almost 50% of the taxes collected. California’s fiscal crisis appears to be brought on by four decades of what has now proved to be bad decisions and promises made by elected office holders (Source: op-ed SF Business Times Sept 18, 2020). To right their ship of state, their answer is to raise taxes. Here are a few new ideas and on the November state ballot.

AB1253: A surcharge of 1% on the first million of income going to 3% above $2 million and topping out at 3.5% for $5 million and above. It is hard to feel sorry for someone making several million per year.

Measure L: (again in San Francisco) would create a tax for businesses where the CEO makes more than 100 times what the median income paid to its SF employees.

The 40 million California residents depend on that top 1% to pay nearly half of the tax money needed to run the state. In reality, can California afford to lose even a few thousand of its high earners? The SF Business Times has mentioned that high earners are considering up-rooting themselves.

The other big issue on the ballot is Prop 15 which would alter the 1978 Prop 13 to a split roll and separate commercial property from residential. Under this new law commercial property with a value of $3 million or more would be reassessed every three years. Currently such properties aren’t reassessed until they are sold to a new owner. The backers in the state voters guide (if I read it correctly) claim it will only affect a handful of large corporations and raise $8 to $11 billion. Sounds good – who cares about the “fat cats” anyway?

Trouble is that most retail and industrial leases provide for the tenants to pay the property taxes directly, not the property owners. And most or the majority of leases for office space have a provision that has the tenant paying the increases in property taxes. So those “large corporations” won’t be affected. It will be the California business owners who will cough up the $8 to $11 billion.

According to an op-ed in the SF Business Times, 70 cents of every dollar that California state government spends goes to ”public employees or a health care corporation.” The Golden State doesn’t appear to have much maneuver room, and the only option is to raise taxes more and more.

This all may be the cause of Idaho and Boise’s exploding growth, not that we are so cool (though I do think we’re pretty cool!).